Real Talk: I’m a Jerk to People I Love

Lately, I’ve have to come to some startling (to me) realizations about myself. The last year I’ve been really rude and hurtful to people who tend to do the most for me. Mainly, my husband and my Mom. This is a vulnerable post for me to write because I’m an overachiever who hates to admit when I’m “less than.” A year ago, I was in a very dark place and I worked hard to keep that a secret. I still don’t think that those closest to me even know how depressed I was. I felt alone. I felt unattractive. I felt forgotten and hurt. I was not having a great time at work and felt inadequate in virtually all aspects of my life.

As a mom? I felt like I was only half there since I had to go to work. And at work? I was receiving criticism and having a pretty terrible time remembering why anyone would provide me with a teacher certification. When you feel like you are failing in so many aspects of your life, you put up walls. My walls took the shape of a really poor attitude. That poor attitude turned into spouting the most hurtful things I could say to the people who were closest to me…and over a year later, I’m still doing it.

Earlier this year, I started going to therapy and was affirmed that not only am I obsessive compulsive, but I was also suffering from PPA or Post-Partum Anxiety. I love momming, there was nothing I would rather be doing. But, right around when Leo turned 6 months, the weather got warmer, and he began to become more mobile I started obsessing over scenarios that would pop into my head when I was trying to sleep, snuggle with Leo, or go about my daily routine. I told no one. I stopped writing in my journal. I did not take care of myself. I used nursing as an excuse to eat.

Fast forward to last summer and I was a ticking time bomb hiding it so, so well. Because if there’s something I’m pretty comfortable with besides momming and being a weird hippy, it’s lying. It’s hiding. Until…I wasn’t anymore. I started having terrible outbursts at Keith (partially because I was angry at A LOT OF OTHER THINGS) and my Mom who takes care of Leo when I’m teaching. I know–I’m an asshole.

This year came and went. I changed grade levels, I admitted I needed therapy (after hiding I was going for almost 2 months), and I started trying to be more clear in my communication. But, I’m not perfect and I’m writing this to share that if you feel like you’re angry, you hate the world, and you’re also a thirty-something mom and wife who is secure in their career, side hustles, and hobbies…it’s still okay to feel all of the bad things. It’s not okay to hurt the people around you…and despite saying this I still do it on an almost daily basis.

Why? I’m sure I have my deep-seated reasons for why I make the choices I do (only child syndrome, OCD gone awry, thinking of past hurt and deciding to hurt to make up for the hurt–yeah…riddle me that), but I’m trying to work on them, change them up, and accept the moments within the past few years that have shaped me. I’m not always a nice person. I’m not always a good wife, and sometimes I’m a downright rude daughter, but I’m trying to put back the pieces without slipping into old habits–and THAT is probably one of the hardest things to do on the daily when you have such a hard time breaking out of the crappy narrative you’ve worked so hard to craft for yourself. It’s time for me to shift the plot a bit…wish me luck! 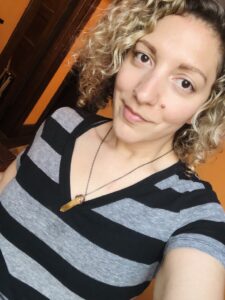 A much needed icy walk & selfie with the furchild.

When I get home, I’ve got some ‘splainin’ to

Treating myself to this divine tie-dye crop from @

The only thing I like about winter is the lighting